Actinic keratoses (AKs) or solar keratoses are superficial tumors consisting of proliferations of abnormal skin cells that develop in response to prolonged exposure to ultraviolet (UV) radiation. These lesions are also called senile keratoses. Actinic keratosis literally means a condition (-osis) of excessive horny (kerat-) tissue induced by a ray of light (aktis), presumably UV light. AKs have historically been considered precancerous or premalignant lesions with a potential for developing into skin cancer. However, in recent years there has been an effort to redefine AKs as malignant neoplasms, because these lesions are essentially the initial stage of cancer in evolution. Although not all AKs become cancers, AKs are the initial lesion in a disease continuum that may progress to cancer. This concept of a progression along a spectrum is analogous to that of cervical carcinoma, for which cervical intraepithelial neoplasia (CIN) is the initial, “precancerous” lesion.

AKs are clinically important lesions, not only because of their potential to develop into skin cancer, but because they are one of the strongest predictors that an individual may subsequently develop melanoma or nonmelanoma skin cancer. With the increasing incidence and prevalence of melanomas and nonmelanomas, persons with AKs are the perfect candidates for careful longitudinal observation for prevention of cutaneous malignancy and early intervention. 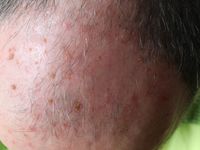 Patients are usually middle-aged or elderly and develop rough scaly areas on sun-exposed sites, which are generally asymptomatic. Many patients give a history of relapsing and/or remitting lesions, which often disappear either spontaneously or after sun avoidance and use of sunscreens.

Actinic keratoses are commonly present on light-exposed areas such as the face, scalp and back sides of the hands. The sides of the neck are involved in both sexes, but the ears predominate in men. The lower lip may also be involved, with a much higher incidence in men than women. The variants of AK include:

A number of classifications have been proposed but none have shown accurate clinicopathological correlation. The term Keratotic Interepithelial Neoplasia (KIN) has been described with KIN1 having minimal cancerous changes at the basal layer to KIN3 showing severe cell changes. However, there is poor clinical correlation with this pathological staging.

Some dermatologists describe the clinical thickness of disease by using the term ‘mild’ with thin slightly palpable disease to ‘moderate’ where AKs are easily seen and felt, to ‘thick’, but this does not take into account any pathological changes.

Actinic keratoses are usually asymptomatic but patients may complain of local itching and discomfort. Most patients find them a cosmetic nuisance. Patients with AK are at a higher risk of concurrent skin cancer and melanoma. Quality of life (QoL) may be affected and can be determined using the AKQoL questionnaire.

The prognosis of AK includes persistence, regression, or malignant transformation into invasive SCC. The relative risk of progression to SCC depends on factors related to the AK itself, such as the length of time an AK has been present and the number of baseline AKs that are on the skin. In addition, the risk for skin cancer increases with increased UV radiation exposure and with certain individual patient characteristics, such as suppressed immune status. It was observed that before an AK progresses to skin cancer, it may become clinically tender and inflamed.

Studies in patients with AK have established, first, that there is a high probability of developing new lesions; and, second, that many lesions undergo spontaneous resolution. Rates of regression of single lesions have been reported to range from 15% to 63% after 1 year. Data available on recurrence rates of single lesions 1 year after regression indicate a recurrence rate of 15-53%. Although the rate of progression of an individual AK to invasive SCC has been estimated to be low (less than 1 in 1000/year), an individual with an average of 7.7 AKs has a probability of around 10% of one AK transforming to a skin cancer over a 10-year period. The presence of AK is therefore an important biomarker of excessive UV exposure and increased skin cancer risk.

The estimated rates of metastases arising from actinically derived SCC have ranged from 1% to 2% to over 20% depending primarily on depth of invasion, location (with the lip, ear, and scalp representing the sites of highest risk), differentiation, and the presence of invasion around neurons.

Diagnosis of AK is made on clinical grounds but a skin biopsy may be necessary to differentiate from a skin cancer or Bowen disease. More recently, non-invasive techniques such as reflectance confocal microscopy and high-definition optical coherence tomography have been used to determine the optical features of AK and differentiate these from cancer.

Tumor protein 53 (TP53) is a tumor suppressor gene, which helps to repair cells when DNA is damaged by UVR and causes cell death when the damage cannot be repaired. Mutations of TP53 are frequently seen in AK.

p16 is also a tumor suppressor protein. It is involved in the arrest of the cell cycle and its mutations can also be caused by UVR. Inactivation of p16 leads to continuous cell cycling and it is thought that inactivated p16 advances AK to skin cancer.

Management of patients with AK needs to begin with a thorough explanation of the nature, natural history and risks associated with the presence of these lesions. As AKs are a highly sensitive marker of levels of UV exposure capable of producing malignant change, patients are educated in the signs and symptoms of skin malignancy and given information in written and pictorial format to assist them in recognizing skin cancers. Asymptomatic patients with ‘low-risk’ disease and few thin AKs may decide that no treatment is a reasonable option. Other patients may wish to simply use emollients but all should be advised to use sun blocks. Regular sunscreen use has shown to reduce the rate of development of new AK indicating that continuing UVR exposure plays an important role in promoting the development of clinical lesions.

When a decision to treat has been made, particularly in those in the ‘high-risk’ group, there are a number of therapeutic options available, with the aim to control and reduce the number of AK and to reduce the rate of progression of AK to cancer.

There are a number of creams/gels, destructive treatments which are selective such as PDT and non-selective such as cryotherapy, and surgical techniques such as curettage and cautery, available to treat AKs. Treatment depends on local expertise, availability of the particular therapy, patient choice and area of AKs to be treated.

Topical retinoids have been used to treat AKs with limited benefit. Oral retinoids (acitretin) have shown some benefit in reducing the number of AK but evidence remains poor. Sequential therapy has been reported to decrease AK when single agents have failed but further work is required to determine which treatments and their order of delivery are best at achieving reduction or clearance.

Dermabrasion and chemical peels with trichloroacetic acid have been widely used in some countries for the treatment of AK and severe photodamage. There is some evidence that this approach may provide more long-term effective prophylaxis against AK. Non-ablative fractional resurfacing has also been reported to reduce AKs and improve skin quality in small studies. A study comparing ablative carbon dioxide laser to cryotherapy in lesion-directed treatment, showed that at 3 months 78.2% and 72.4% of lesions remained clear, respectively. However, at 12 months follow-up of the lesions clear at 3 months, there was a significant difference with 37% of lesions remaining clear in the carbon dioxide arm and 66.8% in the cryotherapy arm. It was concluded that cryotherapy was more effective for thick AK.

Given the potential of AKs to progress to malignant lesions, it is important to focus on the prevention of these precancerous lesions. Educational and preventive efforts should be directed toward children, targeted high-risk populations, and all patients. Avoidance of UV radiation is the single most effective means of decreasing the risk of AKs. A strategy designed to limit the amount and intensity of sun exposure, starting in childhood and continuing throughout the person’s life, will likely decrease the number of AKs an individual will develop. Because complete avoidance of the sun is impractical, the next best preventive measures are to avoid exposure to intense midday sun; consistently apply and reapply broad-spectrum sunscreens; wear UV-protective clothing, hats, and sunglasses; install UV-protective windows where indicated; and make sure to take an oral vitamin D supplement if necessary to avoid vitamin D insufficiency or deficiency.

Unlike the controversy with topical retinoids, there is strong evidence for the use of systemic retinoids in preventing AKs, especially in high risk populations, such as organ transplant recipients, patients with xeroderma pigmentosum, and other chronically immunosuppressed patients. Unfortunately, the systemic retinoids are only effective while the patient is taking them and their use is also limited by the frequent occurrence of systemic toxicities, including hypercholesterolemia, hypertriglyceridemia, mucocutaneous xerosis, musculoskeletal abnormalities, and alteration in liver function. Thus, when considering the use of systemic retinoids in such high-risk patients, one must weigh these risks and benefits.

Dr. Nikki Tang
10+ years of experience
since November, 2019 with SkyMD