Psoriasis is a chronic inflammatory skin disease affecting 7.4 million people in the United States alone. It is prevalent in 1-2 % of the world population with variations based on region and skin types. It causes red, itchy, and scaly patches affecting various parts of the body including the chest, arms, legs, trunk,scalp and nails.Nail psoriasis affects upto 50 % of people suffering from psoriasis and 80% of people suffering from psoriasis arthritis.

Nail psoriasis changes the structure of the nail, altering its physical appearance. It is unsightly and if diagnosed must be immediately treated with a dermatologist’s help. The disease can affect fingernails as well as toenails. It can affect any age group, race, sex, although male predominance is reported largely.

There are various traditional and advanced treatments available for nail psoriasis. Cosmetic repairs are also a promising option available to treat psoriasis of nails.

What is Nail Psoriasis?

If you have psoriasis you may observe few changes in your nails. Psoriasis of skin and psoriatic  arthritis both can be associated with nail psoriasis. Discoloration, thickening of the nail, and pits over the nail surface are few of the typical nail changes seen. They may also appear thinner and become painful over time. 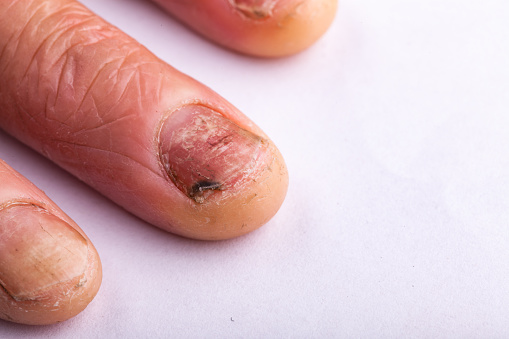 The following symptoms are commonly seen in psoriasis nails,

Psoriasis is an autoimmune skin disorder. It alters the immune system and causes an increase in skin cell turnover in the body. The disease causes unsightly skin patches to develop and may disrupt the individual’s quality of life.

It can also make one self-conscious. Various environmental and genetic factors cause the disease. Many theories explain the etiology of the disease,

How to treat Nail Psoriasis?

Treatment for nail psoriasis can be customised as per the patients need and extent of nail involvement. Traditionally, antifungal drugs and topical treatments were majorly used. Nowadays, many advanced treatments are also available to deal with psoriasis nails in severe cases.

Topical treatments are common to treat psoriasis nails. They are applied once or twice a day. They are available as,

Corticosteroid injections or creams applied on affected nails have been effective in reducing a few symptoms. These symptoms include thick nails, elevated nails, and separation.

Retinoid-containing ointments such as Tazarotene have also proven to be quite effective in reducing some symptoms of nail psoriasis. It reduces pitting, discoloration, and separation of the nail from the nail bed.

Topical therapies alone are not adequate to treat psoriasis nails as relapse is a common issue. A combination of treatments has proven higher efficacy and low chances of relapse.

Oral medications like cyclosporine, methotrexate, apremilast, and retinoids are prescribed as pills, liquids, or injections. These drugs help clear out moderate to severe psoriasis.

In several cases, affected nails can be removed painlessly by using a high concentration of urea and phenol. The nail becomes jelly-like and can be peeled off. Surgery can also be done to remove nails although the nail will grow back. Hence, it is not the most preferred option.

Phototherapy also called light therapy has proven effective in treating nail psoriasis. It reduces pain and itchiness goes away. In the treatment process, affected nails are exposed to a light source which decreases the production of new cells. Light therapy involves exposure to the following light sources,

First, you soak your nails in psoralen solution and later expose them to UV radiations. This treatment reduces discoloration and nail thickening. This in turn reduces the chances of fungal infection and improves the appearance of your nails.

In addition to medication, the following preventive measures should be taken to treat nail affected by nail psoriasis,

Using indigo naturalis, herbal medicine has proven to be effective in improving thickened nails and onycholysis.

When to see a doctor?

It is highly recommended that people with psoriasis must consult their dermatologists for diagnosis and prescribed treatment. The National Psoriasis Foundation recommends immediate diagnosis and treatment and patients to seek medical help.

If the disorder has relapsed or has aggravated over time you should seek a certified dermatologist's help and guidance. Your doctor will suggest personalised treatment options, new therapies, or alternative therapy.

How to hide Nail Psoriasis?

If you feel self-conscious about your nails you can try cosmetic treatments as well. Nail filing, buffing, and using nail polish can hide nail psoriasis.

Patients should avoid getting fake or acrylic nails done. As it will increase the chances of separation from the nail bed and promote fungal infections.

Psoriasis is a chronic inflammatory disorder affecting many people all over the world. It significantly impacts the quality of your life and mental well-being. It is important to manage it well, take precautionary measures and treatment at the right time. Ongoing research has suggested various new therapies and is striving to find a cure for psoriasis.

Finding a trustworthy dermatologist who will provide genuine guidance to you can be challenging at times.

Patients are at the core of this virtual clinic and they provide online assistance throughout the day.

The team of dermatologists has a collective experience of over 1,000,000 cases with a broad range of specializations.

Book an appointment to speak to your dermatologist today!

Dr. Nathanael Hathaway
of experience
since August, 2021 with SkyMD